As brands around the world take baby steps towards creating sustainable products and environment-friendly decisions, in an effort to do their bit for the environment, two women in California founded Skoy Enterprises LLC.

Appalled upon finding out how many tons of paper towels were being used in the kitchen annually, they had a desire to share a cloth that was better than any cloth they had ever used and was environmentally friendly.

Staying true to its tagline - “Everyday cleaning made simple...with the environment in mind” - Skoy has helped numerous kitchens be a tad more eco-friendly with their niche category of kitchen cleaning products.

Skoy’s kitchen product line is not only innovative and eco-friendly, but also features quirky and colorful designs - making their kitchen towels, cloths and scrubs a super-hit on Amazon!

To Fee or Not to Fee

Amazon provides a service known as Fulfillment By Amazon (FBA) that provides storage, packaging, and shipping assistance to sellers.

Amazon charges fulfillment fees per unit, which vary depending on if the product is standard size or oversized, and include picking and packing, shipping and handling, customer service, and product returns.

FBA fees are calculated for each product based on the unit’s size, weight, longest side, shortest side, length, girth and other such factors.

Coming to Skoy, SalesDuo observed that the same category/family of products with the same unit weight/size had different FBA fees applied to them.

For instance, if product A, B C and D have the same shipping size and weight, naturally, their shipping fee should be the same as well. However, this was not the case for Skoy’s kitchen cloth. While product A and C were displaying the correct shipment fee, product C and D displayed a different - and higher - FBA fee due to an error in Amazon’s internal measurement system.

As Skoy sells only a handful of niche products, the company operates on a thin margin - the disheveled FBA fees for the products led to an unnecessary expenditure that had to be regulated as soon as possible. 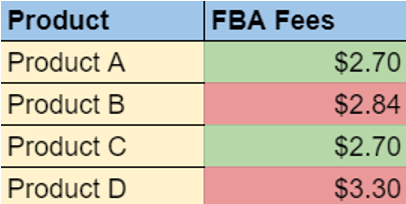 Once SalesDuo realized that the FBA fees were calculated incorrectly, the plan of action was to appeal to Amazon to get the inaccurate fees being charged corrected and to get the reimbursements from Amazon for the same.

However, getting the FBA fees fixed was easier said than done. Multiple hurdles presented themselves along the way.

Amazon measured the products again after SalesDuo’s appeal. However, the measurements did not match up with the product’s actual dimensions.

Only after SalesDuo provided them with the required inputs on the measurements with images and weight specifications was Amazon able to get this fixed.

Even after SalesDuo had provided the necessary details and the correct information regarding the weight and size of the products, the to and fro with Amazon went on for six weeks before the issue was finally resolved.

Once the products were measured correctly and the fees were fixed and regulated from Amazon’s end - SalesDuo created a reimbursement report, shared it with Amazon and retrieved the incorrectly charged fee for Skoy.

A Fulfillment by Amazon (FBA), Indeed!

After repeated to and fro with Amazon and continuous follow-ups, SalesDuo was finally able to get the FBA fee regulated for Skoy’s product categories.

The unwarranted hike in FBA fee for some of the products was an unnecessary loss for the business and getting this fixed on time saved a lot of money for Skoy that could have been lost later. Moreover, SalesDuo was also able to get the previously incurred incorrect shipment charges reversed.

By getting the FBA fees regulated for Skoy, SalesDuo saved the company an amount that made up roughly 2% of Skoy’s annual revenue!

Had this inconsistency not been promptly noticed by the team at SalesDuo, Skoy would have paid a higher fee for their products for no good reason.